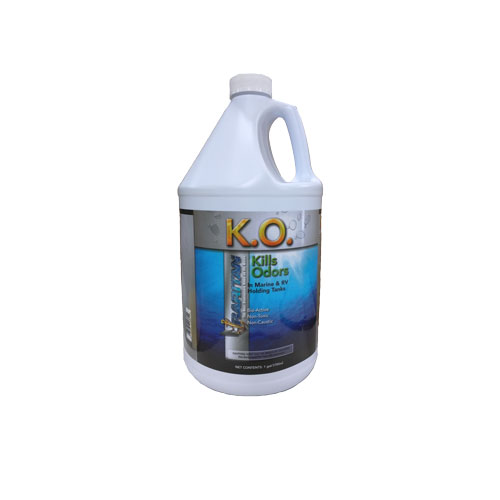 “If You Use a Holding Tank – You Need K.O.” – ODOR CONTROL IN HOLDING TANKS

It really IS possible to have a completely odor-free system!

You’ve probably read or heard, over and over again, that the key to odor control is the “right” hose, that the “wrong” hose permeates with sewage and causes the system to stink. That’s folklore…a little truth coupled with a lot of misunderstanding.

The real key to odor control is in knowing how to incorporate proven sewage management principles—the same ones used in composting and sewage treatment—into the installation of the entire system. What few people in the marine industry have learned, and why there is so much folklore about odor, is the very nature of sewage itself and how it breaks down, what creates odor and what prevents odor from forming. Once we understood these principles and learned how to apply them to onboard systems, we were able to install systems that are completely odor-free and correct the ones that weren’t.

Once you understand it you can do the same thing.

There are two ways to deal with holding tank odor: try to reduce it, mask it and contain it after it’s formed, by using chemicals and filters—which has never proven very successful…or prevent odor from forming in the first place.

Sewage contains both aerobic (needs oxygen) and anaerobic bacteria (functions in an airless environment); neither can function in the other’s environment.

Why is that important?

A bio-active (live aerobic bacteria) holding tank treatment, such as our own “K.O.” Kills Odors, works with the aerobic bacteria in sewage, eliminating odor, completely emulsifying solids and paper and preventing sludge from forming. Enzymes do little if anything—a brief respite from odor immediately after adding them, then odor begins to build again.

Chemical products mask odor with another odor and they kill not only odor-causing anaerobic bacteria, but beneficial aerobic bacteria as well—not good, because the aerobic bacteria are needed in the system to break down and emulsify solids and paper. Otherwise, they only break UP and dissolve them into little, tiny particles that settle to the bottom of the tank, along with chemical residue, to become sludge that turns to concrete. Chemicals, unlike bio-active products, are also unwelcome in landside sewage treatment facilities and are especially unappreciated by those living and working near them!

By continuing to use the site, you agree to the use of cookies. more information